The nearly three-decades long Minkkinen Koskela collaboration, is based on deep roots and a bracing sense of humor. In 1996, Kimmo directed and produced the 52 min. documentary Still Not There, a biographical journey on Minkkinen’s life and artistic work. The film garnered international praise with important prizes in Scandinavia and Europe.

The Rain House continues to advance their winning collaboration. The Koskela Minkkinen team is now embarking on the creation of new films — modeled in part on the famed and seamless Coen-brothers partnership — in all phases of the production from the film’s conception to its opening premiere.

The Rain House is a love/hate story between a mother born into beauty and her youngest son, born with a cleft palate. The sexual awakenings the boy experiences - told with warmth, humor, and seductive intimacy - and the failed escapades he suffers as a teenager mark his life forever. His deformity becomes a punch in the mouth that never heals, at least while she is alive.

The Rain House is written and directed by Arno Rafael Minkkinen

Mud, Sweat & Tears is a documentary film about Finnish people diving into new ways to express themselves. It is a philosophical journey to Finnish humor and "guts" to do things in a different way. The documentary opens mental and physical vision to Swamp soccer and Deep Snow soccer games competed in the World Championships level in muddy swamps in the summer and freezing cold deep snow in the winter in north of Finland in the middle of nowhere.

Finland Has a Sports Screw Loose - The New York Times

HYRYNSALMI, Finland — There’s something strange going on in Finland. Over the past few decades, as it has all but disappeared from the global sports ...

Mud, Sweat & Tears is directed and produced by Kimmo Koskela.

A music documentary film produced and directed by Kimmo Koskela won the prize for "The best creative film" at "FIFA-Films for Art" in Canada in 2012 and it was  nominated for Jussi-Award (Finnish Oscar) for the best documentary in 2013. Soundbreaker has been invited to more than 50 International Film Festivals and it was distributed in cinemas in Germany in over 40 Cities.

in collaboration with One Film Production

Now Finnish celebrated composer Heikki Sarmanto has composed 14 songs to the lyrics  by Valto  Baltzar for Le Café deMes Souvenirs, which is a love story between a French teacher and a young Finnish woman. 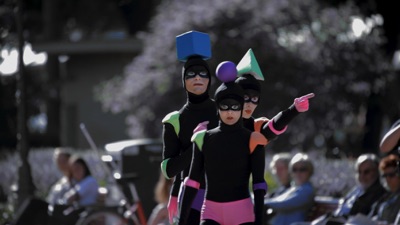 papulaBOX is a happy and colorful dance adventure in the world of geometry and imagination.

It’s the short film all ages will call it’s own.

papulaBOX is a short film without words “spoken through images” for children and for the kid in all of us. Running on happiness, paced on adventure, and reveling in the pleasures of geometry and the imagination, papulaBOX reaches all age groups hands down! papulaBOX intends to demonstrate how ˝the message of dance˝ can lift our spirits and open our imaginations to the terrors and pleasures of earthly grace. papulaBOX draws inspiration from Bauhaus school ideologies as much as from the little tramp Charlie called Chaplin or the Teletubbies. The film never diverges from its staged roots even when it tiptoes over Helsinki town. With their astounding exactitudes and masterful flourishes, the Glims & Gloms Dance Theater does it again! For audiences unfamiliar with dance, the stage is set. papulaBOX becomes a natural addition to the ever-evolving palette of motion and beauty on camera.

Mud, Sweat & Tears is produced in collaboration with:

The commune of Hyrynsalmi / Hyrynsalmen kunta

Black Sun is a film about an individual discovering his place in a former totalitarian state going through a period of transition and change. About the way the unsolved traumas of the past take control of the individual while he is being liberated from a violent social system, with unpredictable consequences.

It is a film about dependence, identity, and selfhood. It describes how an individual becomes conscious of who and what he really is – and how far the others are prepared to go to become something that they are not.

Black Sun takes place in an elitist art world. It is a polemic and a poetic film, a triangle drama containing powerful emotions, a struggle for survival.

Stylistically, the film is slightly heightened, containing references to film noir. The film has a claustrophobic, nightmarish world of its own. I want to create powerful and deep psychological tensions between the characters. The events unfold in a strange, archaic and surprising world where strong images carry the story forward.

Saara and his artist brother Aaro live isolated from the rest of the world in an abandoned war industry district. Aaro, a popular artist during the Soviet era, is now a disreputable outcast of the art community. He is, however, obsessed with becoming immortalised by a surrealistic and grandiloquent work of art in the middle of the forestland, in an open swamp. In Aaro’s plan, the sister and brother will commit a double suicide when his design is finished. They are preparing to die through rituals of their own.

Their lives change when a young man called Stefan, looking like a Greek god, intelligent and influential within the art market, succeeds in encroaching on their enclosed world. He is like a great redeemer whom the desperate brother and sister cling to, both in their own fashion, focusing their own secret desires on him.

Aaro is, however, not ready to bow before the demands the market economy places on art. Then Stefan asks if Aaro wants to share the fate of his father whose career as a poet ended in a prison camp as “an enemy of the State”.

The suspicions of the siblings are aroused. How does he know these things about their father, things that even they did not know? Who is Stefan? What does he want from them? Stefan is revealed to be an imposter, an ex-Soviet spy. His only “wound” seems to be the cut by the plastic surgeon’s knife on his face. Stefan represents those who ruined their father, and their life.

Thirsting for revenge, Aaro now consents to giving in to the demands of the new era. He needs Stefan for it. Stefan succumbs to being the artist’s living work of art, completely unaware of Aaro’s darker side, and of the tragedy of the siblings. A power game for reputation and glory between Aaro and Stefan commences, turning surreal in its cruelty.

Encouraged by Stefan, Saara starts to look into the siblings’ past. She finds out that Mother, whom she thought dead, is alive. In a lunatic asylum, Saara meets a mute, abandoned old woman – Mother. In the gloomy, horrifying institution devoid of all human dignity she also meets a young man called Lojze taking care of Mother.

Saara wants to free herself from the captivity her brother, to prevent the recurrence of the tragedy of their past; to change the course of destiny with the assistance of Mother, now slowly regaining her ability to speak and her memory, and the mysterious Lojze who can see straight into Saara’s heart.

Maria Ruotsala, one of the most prominent Finnish contemporary artists and directors,

has been interested in the cinema for a long time and studied it professionally.

Apeiron, is her first feature film realized in collaboration with Kimmo Koskela, who produced and cinematographed the film.

"As a science fiction about good and evil, Maria Ruotsala’s Apeiron is an original and visually impressive version of Leena Krohn’s ”impossible to film” novel Umbra – silmäys paradoksien arkistoon."

"The adaptation detaches itself from the original work and takes off into another direction. Krohn’s accurate expression receives an equally thought out cinematic counterpart. What suddenly becomes visible in the sci-fi is the inner space of the mind in the spirit of Kubrick, Tarkovsky and Lynch, but also Pasolini, Buñuel and Malick."

"As an art film, Apeiron surpasses the clichés of realism and genre by the freedom of surrealism and avant-garde. It has been made with love and not money, with thought and not effects, but it still fulfils the requirements of science fiction. The result is fabulous."